Researchers of LEPMI, laboratory member of Carnot Énergies du futur, have realised a major step by developing the electrolysis magnetic activation. Their works have been published in the prestigious journal "Nature Energy".

Made of two atoms of hydrogen, dihydrogen (commonly referred as hydrogen) is particularly efficient in energy: 1 kg of dihydrogen creates three times higher energy than fuel with the same quality. Moreover, when it is produced from renewable energies it is regarded as less polluting. Then, hydrogen vehicle's emissions are composed exclusively of water, without any trace of damaging particles or carbon dioxide. However, hydrogen is nowadays mostly produced by steam-reforming, a technology with a high level of greenhouse gas emissions.

Among sustainable technologies, electrolysis is regarded as a competitive one. This process consist in decomposing the water molecules with the help of electric current to get oxygen (O2) and hydrogen (H2). Alkaline electrolysis with an electrolyte circulation is commonly used (with non-renewable electricity resources) but it is combined with photovoltaic or wind power energy. The electrolyser must be heated at 80°C to get an efficient electrolysis, which is hardly compatible with intermittent operation.

To heat when necessary

To face this issue, the LEPMI researchers tried to produce heat when necessary, with the support of magnetic activation usually used in cancer treatments. Hyperthermia consist in using magnetically sensitive materials that are heating when immersed in a magnetic field. Besides the energy saving by heating locally and reducing overvoltage, this method provides the benefit to preserve the rest of the electrolysis cell from side reactions (aggravated by the rise of the temperature).

With the support of the Engie company, researchers have developed a proof-of-concept by accomodating a common electolysis cell to insert it in a coil and to realise electrochemical measures under a magnetic field. Thanks to this demonstrator, researchers have demonstrated that magnetic activation was improving the kinetic reaction of the electrocatalytic activity. The result of the experimental cells are suggesting a significant technological adavance. 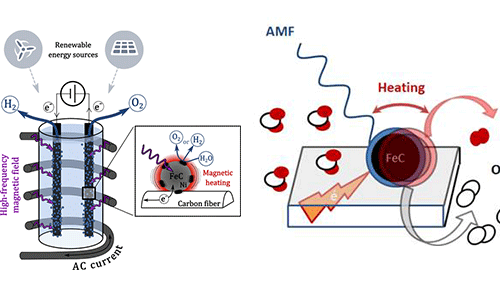